No matter your desired outcome, taking a pregnancy test can be one of the most frantic and nerve-wracking experiences. The results determine the trajectory of the next, oh, 18+ years of your life and can bring about an enormously wide range of emotions.

If you’ve been trying to conceive for some time, you’re probably familiar with ovulation tests and have imagined the immense joy you’ll feel when you see those double lines staring back at you on an actual pregnancy test. It’s a rush of excitement, anxiety, and sheer happiness that can seem almost intangible when you’re on your 5th+ month (or 5th+ year) of peeing on sticks.

RELATED: Not Sure When To Take a Pregnancy Test? This Calculator Will Help

But even if this is your first time at the at-home pregnancy test rodeo, the experience is usually an incredibly personal process. This is why it’s nice that tests are sold over the counter and at a somewhat affordable price. They work by detecting the levels of human chorionic gonadotropin (HCG) (aka the pregnancy hormone) in your urine, which usually become present a few days after fertilization and then multiplies at a rapid pace every few days after.

It usually takes anywhere from 2-5 minutes for the test to show results, typically in the form of two lines to indicate a positive and one line to indicate a negative. If you think you’re pregnant and got a negative result, test again in a few days, since it’s possible that your levels of HCG simply aren’t high enough. This means you’ll likely need a handful of tests each month of trying to conceive (you can buy in multiples rather than in single packs to save a little on cost).

Here are some of the most trusted and user-friendly pregnancy tests on the market for 2020. 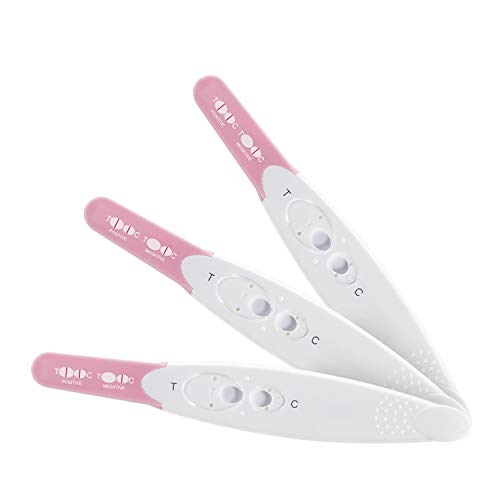 Like many other pregnancy tests on the market, this one is easy to use—and hard to misinterpret. It is over 99 percent accurate and sensitive to hCG as low as 25 mlU/ml. It looks very similar to other leading pregnancy tests, with an absorbent tip that you pee on for 10 seconds (or dip it into a plastic cup for the same amount of time) and see the results within 3 minutes (and no longer than 5 minutes). The results region has two different splash proof windows, one showing the control zone and one showing the testing area. Two lines means you are preggo and one line means you are not pregnant. Anything in between is not an accurate reading. Reviewers rave about the fact that these tests are super easy to use and that they are ultra sensitive, meaning they are able to detect pregnancy multiple days before a missed period. 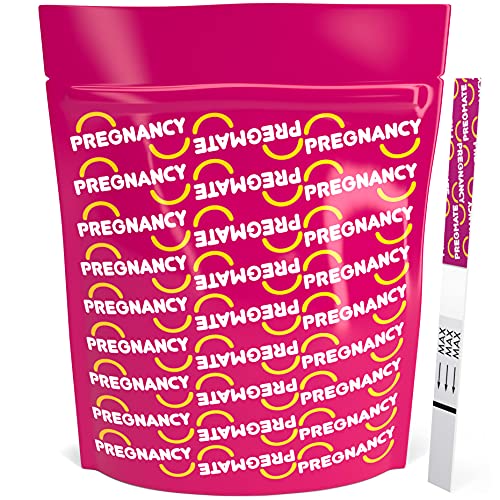 Pregnancy tests don’t have to be complicated or technologically impressive. In fact, the whole concept of testing for pregnancy has been around since ancient times. So if you think you’ll be testing a handful of times, and maybe even for an entire 6 months (like more than 50 percent of couples), you’ll want to stock up on a whole lot of these puppies. This pregnancy testing brand is one of the top-rated on Amazon not only because of its ease of use but because of its practicality. It comes in a pack of 50 tests all for the price of what other brands are only selling a handful of tests. It’s as reliable as they come (over 99.8 percent to be exact) and are meant to be used 5 days before your missed period. Sounds pretty darn promising! To use, simply pee into the cup provided, dip the strip for 3 seconds, lay it flat and check the results in 5 minutes. 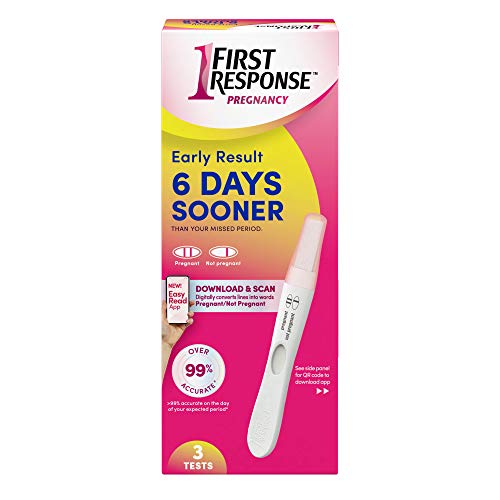 First Response is one of the most trusted pregnancy (and ovulation) brands for a few reasons. One of the two most common pluses is their reliability and crystal clear results. There is usually no guessing involved—it is either a positive with two double lines, a negative with one line, or something in between which usually means you are pregnant. It claims to be capable of giving you positive results six days sooner than your missed period, which, for some women, can be as soon as 8 days after whenever you think you might have conceived. Like other tests, it works by detecting four major forms of the hCG hormone found in urine with over 99 percent accuracy. Reviewers love its sensitivity and how easy it is to tell whether the results show a positive or negative. “I’ve tested as early as 8DPO and gotten a positive,” said one reviewer. 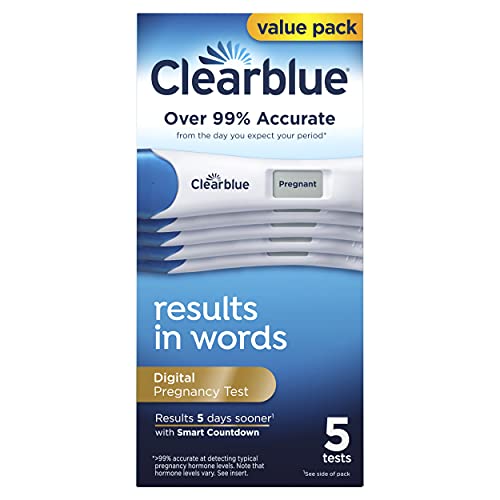 Some people are just not into reading lines to determine whether or not they are expecting a baby. There’s no shame in simply wanting a more straightforward answer. That is what digital tests are able to give you—basically a yes or a no. With Clearblue Digital Pregnancy Test, you see a blank window and, a few minutes after you pee on the absorbent tip of the stick, you’ll either see the words “Pregnant” or the words “Not Pregnant.” It is nice because there’s little guessing involved (although it is still possible that you may have tested too early if you got a negative result and should consider testing a few days or a week later just in case). It is sensitive enough to detect pregnancy up to 5 days before a missed period and is over 99 percent accurate from the day of your expected period, according to the brand. 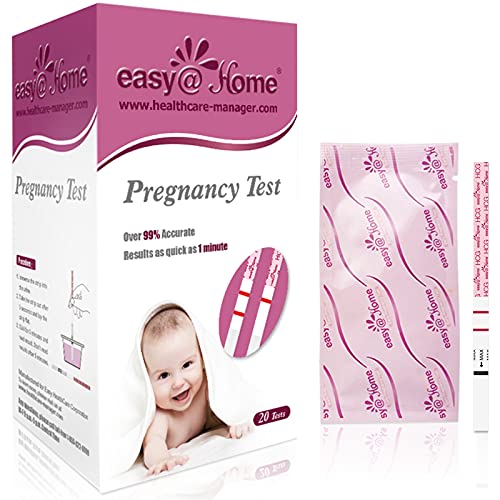 If you’re looking for a total bargain on pregnancy tests, but don’t want to sacrifice on accuracy or quality, these are a great purchase. You get 20 tests all for less than $8. They’re nothing fancy—just test strips—but they’re super easy to use and they can detect levels of hCG as low as 25 mlU/ml in as little as five minutes. One thing to note is that these aren’t the super early testers. Unlike other tests that can detect the amount of pregnancy hormone 5-6 days before your missed period, this one is meant to be used only one day before. In fact, to be safe, you may want to just want until you have a missed period to use this test. One reviewer said this was the best dip strip available. “I have been using pregnancy tests for years and these are the clearest to read,” she wrote. 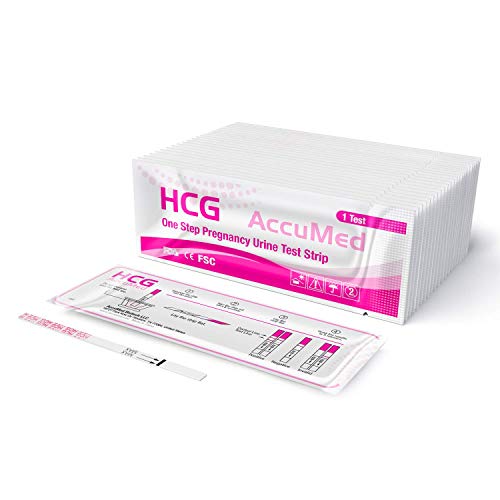 These pregnancy tests are a straight-up steal. For less than $10 you get 25 tests that are up to 99 percent accurate and are easy to use. If you don’t mind the fact that they’re nothing fancy and rely on lines to reveal a positive or negative, you’ll find these strips incredibly useful. They are meant to be used up to 5 days before a missed period and detect hCG levels as low as 25 mlIU/ml. The test works best by urinating into a disposable cup and immersing the test strip into the urine for approximately 3 seconds—not shorter or longer. You don’t want to immerse the strip past the MAX line (indicated on the strip). Once you’re done, lay the test flat and after five minutes or so, check to see your results. Two lines mean you’re pregnant and one line means you are not (or it’s too early to tell). 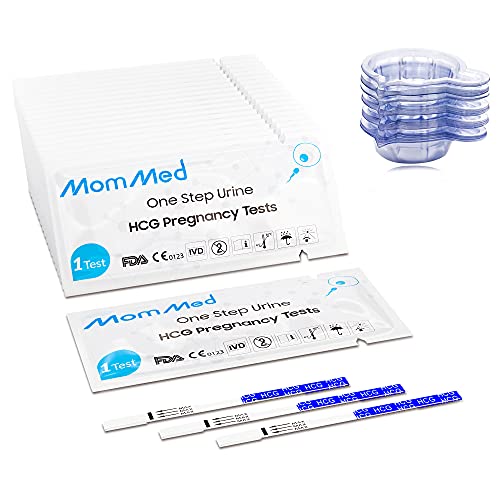 This is another favorite among frequent testers because of its bargain price. For less than $10 you get 20 individually packaged pregnancy test strips along with 20 urine cups (so you don’t have to use your own). This package is most ideal for individuals who travel a lot, since you can easily pack one or more tests with you in your bag and it will take up virtually zero cargo space. Each test is over 99 percent accurate and tests the amount of hCG in your urine (like most other tests). The big difference is the 20 urine cups included, which can be a nicer experience than having to pee in a cup that you sip your morning coffee out of. It’s easy to use—simply pee in the disposable cup, place the strip in the urine for at least 5 seconds (comparative to other tests that are 3 seconds) and wait 5 minutes before reading your results. 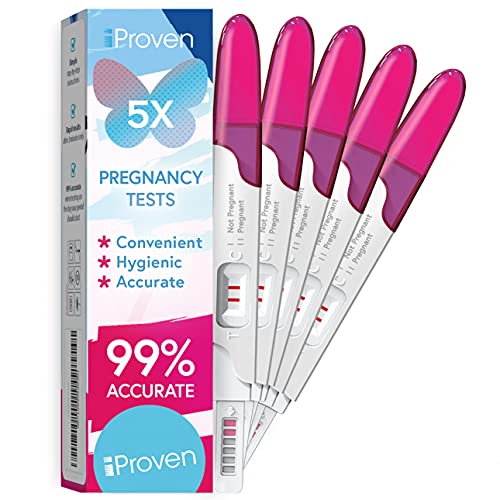 These tests are pretty simple, straightforward and sold at a great price compared to some other tests that you will find at your local drug store or online. Each box comes with five tests that promise to be 99 percent accurate on day one of a missed period. The test is easy to use—simply pull the cap off and pee on the absorbent tip for 10 seconds (note that many other tests require you to pee for less than 5 seconds, so make sure you drink a lot of water before or have to pee super badly) and wait 3-5 minutes for your results to show. The results will be either one line (not pregnant) or two lines (pregnant). One other great thing about this brand is that they have a 30 day no-questions-ask money back guarantee, which is pretty unusual for a pregnancy test.

Whether you’re expecting or trying to conceive, consider stocking up on these pregnancy essentials that’ll come in handy during those nine months and beyond.