How I Gave My Child The Worst Christmas Ever

1. First off, I made sure that my son was SUPER excited to fly from snowy Colorado to sunny California on the day before Christmas to visit his grandparents with his Dad and me and his baby sister.

2. I noticed on the plane ride that he was looking a little droopy. I thought to myself, I probably shouldn’t have cancelled that appointment for him to get his flu-shot a couple of weeks ago. But then; Oh, he’ll be fine!

3. We arrived. It was Christmas Eve. The kids got to play on the beach and their great aunt and uncle arrived and he made Christmas cookies with his Nana. And he quite possibly licked his fingers and touched everything in sight, but this fact becomes more important later. The kids opened some presents and I drank some eggnog and we put the kids to bed and played Santa and then settled in for our long winter’s nap.

4. I woke up in the middle of Christmas night to the sounds of puking. Hot foreheads. Not only my son, but also my husband. They were miserable. They were delirious. I was up all night worrying, changing sheets, and administering ibuprofen. Because, you see, I work in health care so I had received my flu shot. And so had the baby, because, well, she was a baby.

5. Christmas day.The one person who should have cared about Santa, did not care. Nana and Granddad started the day off okay, but then they went down too. Slowly, sadly. We learned via text messages that my aunt and uncle who had visited the day before started going down as well. My son had managed to infect at least 5 people and I began to see on the news that California was being inundated with the flu-virus. I began to worry that he had caused it. I also began to worry that they are going to track the origin of the virus to a plane from Colorado. The baby and me were all alone while everyone else lay in sad little piles all over the house. It was claustrophobic and germ-filled and so, of course, I started to clean.

6. The cleaning was innocent at first and then became something of an obsession. I attacked every surface with bleach and more bleach. Then I made buckets of chicken soup. I fed the baby. We were both living in a petri-dish of flu and there was no where to go and no one to help us. We were the last two people standing.

7. On the third day my sister called cheerfully from Minnesota. “Oh wow. So sorry we didn’t make it this year!” And then she quickly hung up just in case the flu germs could travel over the phone lines.

8. Days went by. It was a flu of epic proportions. Soup. Crackers. Checking foreheads. Cleaning. Washing soiled laundry. It was all me. IT. WAS. ALL. ME.

9. My family began to slowly re-emerge. My son continued to have high fevers so I took him into urgent care on that Saturday. We sat for hours. He had a ruptured ear drum so they gave him antibiotics.

10. My mom started to have a cough that sounded bad and was keeping her awake all night. I took her to urgent care on that Sunday. We sat for hours. She had bronchitis and was put on antibiotics.

11. My son had a reaction to the antibiotics and began to puke and anything that came out the other end burnt his skin raw and red. I placed him in the shower to wash him off and was completely freaked out when I saw how skinny he looked. I took him back to urgent care.

12. At urgent care, I was told by a nurse that me and another nurse would need to help hold my son down while they gave him an antibiotic shot in his butt because it was going to be really painful. My poor, skinny, dehydrated little boy cried so hard from that needle that he ended up getting a bloody nose. He was the most pitiful creature I had ever seen and I think at that point I might have promised him a pony.

14. When he got back to kindergarten, he was told to write a story about what he did over Christmas vacation and this is what he wrote: 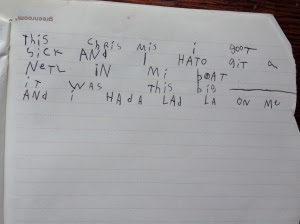 Translation: This Christmas I got sick and I had to get a needle in my butt. It was this big————–. And I had a lady lay on me.