Lizzo And Chris Evans Kept Talking After *That* DM Incident

Are Lizzo and Chris Evans total besties now after she drunkenly DM’ed him? All the screenshots point to yes

Lizzo just continues to be one of the most relatable celebs ever to exist. Not only is she incredibly open about her journey toward body positivity (and the sometimes complex feelings about her body that come with that). Another #relatable thing to love about the singer? She once got a little too tipsy and slid into the DMs of none other than Captain America himself — Chris Evans. Listen, who among us has never had a glass or two too many of prosecco and shot your shot with a celeb? Only in Lizzo’s case, it appears to have actually worked.

Lizzo posted the original video with the caption, “Don’t drink and DM, kids,” sharing a screenshot that showed she sent Evans a series of three emojis: The puff of wind, a water polo player, and a basketball. No idea what it meant, which makes it all the more intriguing.

Then she shared the much-anticipated follow-up that included Evans’ response.

The singer posted yet another update in the DM saga to her TikTok in response to a fan who asked the question that has, TBH, been on all of our minds: “LIZZO HOW ARE THINGS WITH CHRIS EVANS GOING KEEP US UPDATED BESTIE.”

That prompter her to share yet another screenshot of her Insta DMs with Evans (who, we should note, has officially followed her back), laughing and saying, “Let’s see what your pause game is like,” as the image flashed across the screen for a split second.

As it so happens, my pause game is phenomenal, LIZZO. And for anyone else who is lacking in the pause department, don’t worry, I got y’all a screenshot. You’re welcome. 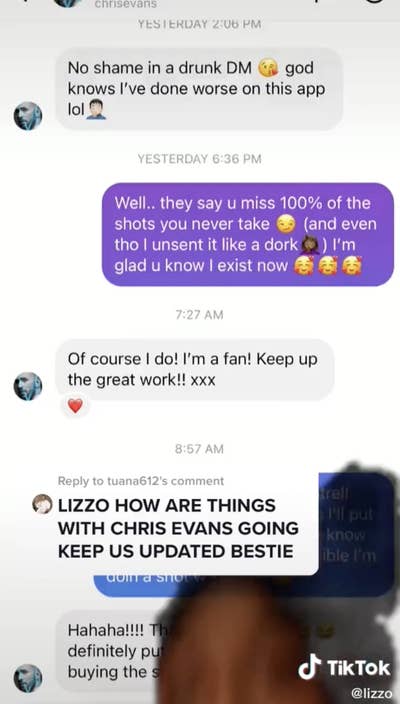 The screenshot shows that Lizzo and Evans definitely continued their conversation past the initial one that was posted before. We can see that Lizzo responded to Evans making her feel better about her drunken DM-ing by saying, “Well.. they say u miss 100% of the shots you never take,” and adding, “I’m glad u know I exist now.”

Is anyone else making eye emoji eyes at those x’s in his message? Awfully familiar for these two people who are allegedly basically strangers. Exhibit A that this incident has made them besties.

There was actually more to the DM conversation, but it’s unfortunately covered. We can see that Evans laughed at something Lizzo said — more evidence that there’s a for real bestie-ship blossoming here. Could it even blossom into more? Who knows, but you know we’d be here for it.