You know what they say about Disney World — it’s the happiest place on earth. (Maybe not for all parents after a long hot day, but honestly some of us are eating Disney sh*t up like it’s booze-infused dessert.) But for the kids, what if you could bottle up that happiness and magic and take it home, without all of the hassle of traveling and the steep cost of the park? Makes cents! That’s why moms are always on the hunt for the best Disney toys to appease their little monsters.

From classic characters like Mickey Mouse to newer characters introduced on Disney+ Junior shows like Fancy Nancy, we’ve gathered everything from interactive sets and dress-up gear to board games and educational toys. Check out our 10 picks and kick back and get a little nostalgic while watching your kid be entertained.

This little guy is the perfect snuggle buddy for any Star Wars: The Mandalorian fan. Fluffy Baby Yoda is extra soft, squeezable, and even comes with a faux suede coat. One happy customer said, “I love this little guy, and so does the little guy I gave it to. This Grogu is baby safe. He is totally soft, and the eyes are embroidered on and there is nothing else that can come off and be swallowed, like buttons. My great-nephew loves him.” 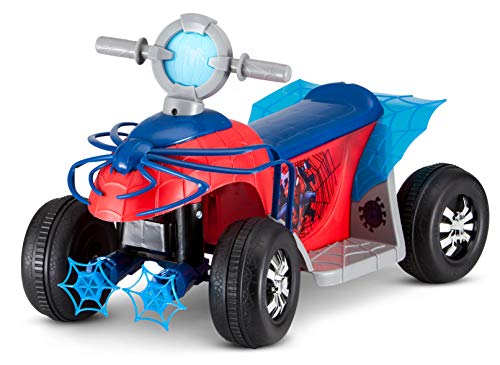 What kid wouldn’t want to move as fast as Spiderman? This ride-on toy will make them feel like they’re invincible, but don’t worry Mama, it’s super safe too. The decorative spider webs work as bumpers, and the rubber traction strip tires make it easy to stop and go. If your little one isn’t into Spiderman (or wants the motorcycle version), there are eight other options to choose from! Other characters include Minnie Mouse, Lightning McQueen and Mater from Cars, Disney Princesses, and Frozen.

Your kiddo will be the best space ranger ever with the Buzz Lightyear Space Ranger Kids Astronaut Helmet Jetpack. The helmet has a button activated visor, adjustable straps, and plays Buzz’s famous phrases.

What’s a doctor without a face mask? During the time of COVID, having a mask for your doll can help normalize things for your little one. Luckily, this Doc McStuffins comes with a doll sized face mask that fits perfectly! Along with a doctor’s bag, pretend stethoscope, thermometer, and otoscope. Oh — and she sings too! One fellow Mama said, “My daughter is in love with this toy. She takes it everywhere with her. I like that it sings about washing your hands because my daughter loves music. It comes with a mask for the doll to wear which helps promote staying safe during this time we are all going through. It only say 3 phrase which is great.”

Standing at 16 1/2 inches, this Arendelle castle truly has it all. It opens to a replica of the inside the home shown in the movie too! This set includes Anna, Elsa, Kristoff, Olaf, and Sven figures, as well as 10 pieces of furniture. The castle also lights up and plays music.

Has your child stopped singing “Into the Unknown” yet? Well, they won’t stop anytime soon with this Disney Frozen 2 Sisters Musical Snow Wand that plays, you guessed it, “Into the Unknown”. If you wave the scepter, a glittering snow flurry will magically swirl around Anna and Elsa. This toy is the perfect addition to a Frozen 2 costume or can be used as an added prop for bedtime stories. Either way, if your little one is still Frozen-obsessed, they’ll be head over heels for this toy. One reviewer said, “Bought as a gift for a friend’s child and they loved it! [It] comes with batteries and is loud and clear when playing. Good quality toy.” Helpful tip: When you get the toy, make sure to switch the mode from “try me” to “on.” The toy arrives in “try me” mode which plays only a snippet of the song. Once you switch the mode to “on” you’ll get the full version and you’ll be karaoke ready.

Disney Pixar’s Onward is a new release but in true Disney fashion, it’s sure to become a classic. The story follows two teenage elf brothers, Ian and Barley, who embark on a quest to spend just one more day with their father who passed away. A journey ensues filled with maps, obstacles, and magical discoveries but when their mom discovers that they are missing, she puts her own team together to bring her boys back home safely. Grab the tissues because this movie will definitely leave you misty. Your child will enjoy this film and reenacting their favorite scenes and characters with this deluxe figure playset. This eight-piece set includes the two brothers, Barley and Ian, their mom, dad, pet dragon Blazey and more characters from the film. Ready for play for children age three and older. The film is now available to stream on Disney+ so you can make a night of it.

If you have a princess-obsessed child, chances are they’ve begged for a Disney princess dress at least once in the last hour. Well, have no fear. This Disney Princess Dress Up Trunk comes with a collection of princess must-haves for your royal little one. Dress-up is always fun and ignites your child’s imagination. This dress-up kit features 21 different pieces including four tops, three skirts, and a bunch of royal matching accessories. There’s even a sticker sheet for added play! So which princesses are represented inside? This Amazon exclusive includes four classic Disney Princess characters, Aurora also known as Sleeping Beauty, Belle, Cinderella, and Snow White. One reviewer said, “Our kids love having this handy lot of dress-ups. Just great if you have two young girls who would fight over their costumes, now plenty to go around.” For added fun, make it a movie night and have your little one switch outfits between each film featuring their chosen princess.

This learning watch is part toy, part educational tool which makes it a double win for mamas. It features four exciting games that explore numbers, counting, and shapes, all while your kid tries to defeat Romeo, Luna Girl, and the Ninjalinos — villains from the PJ Masks show on Disney. Your child can use their imagination to pretend to transform into Gekko using the amulet. The games feature the voices of Gekko’s sidekicks, Catboy and Owlette. The watch also includes nine different PJ Masks clock faces, an alarm, timer, stopwatch, and even a cuckoo clock that hopefully won’t drive you crazy. One reviewer said, “I purchased this for my 3 year old’s birthday gift and he loves it! He has not wanted to take it off since we gave it to him. He loves pressing the buttons and playing the games. I was worried he would be too young to enjoy it but it was one of his favorite gifts by far.” 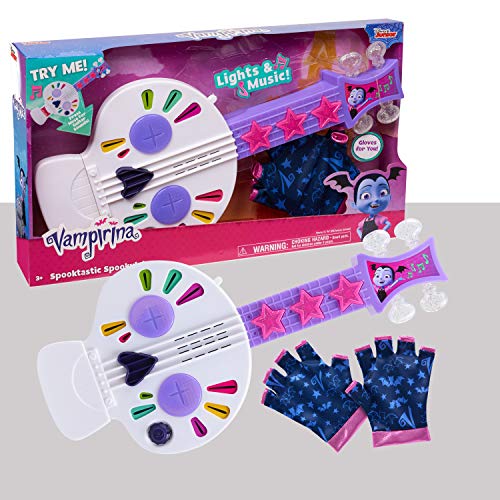 Everyone knows one of the best parts of the Vampirina TV show is the music, especially the moms who have to listen to it on in the background all day long. Help your little one strike a chord by treating her to a Vampirina­-themed music session. This musical set includes one spookylele – get it, like, ukulele?! – in the shape of a skull and a pair of fingerless gloves for playing and rockin’ on. The spookylele – just like the real one Vampirina plays in the show – features lights, sounds, and music that will sound familiar to your little fan and honestly, to you, too. Whether she loves jamming to the series theme song or the pop classic “Livin’ the Scream” your vampy rock-star-in-training will never stop thanking you for this thoughtful gift. After all, there’s no better gift than the gift of music. Couple it with her favorite Disney Junior character and it’s a total win for you, Mom!

When Buzz Lightyear’s spaceship crash lands at the head of your child’s bed, it won’t be a mistake. Get ready to reach for the stars with this Disney Pixar Toy Story Star Command Spaceship Playset. This 2020 Toy of the Year Award Finalist, comes with a glow in the dark Buzz Lightyear figure, moveable accessories, multiple play areas, and a working claw, lights and sounds to aid with imaginative play, and a second quad vehicle for adventures outside of the ship. When you power up your rocket fire lights shoot out of the rear exhaust for a realistic takeoff or landing. If your child is a fan of the Toy Story franchise, they’ll enjoy going on make-believe galaxy adventures with this playset. There are a variety of themed areas and special features that’ll give your child, ages 3 and older, a launch point for fun. To infinity and beyond!

If you have a Doc McStuffins fan in your life, then you definitely need to get them this adorable kit. The pink and purple bag looks exactly like the one used by Doc McStuffins in the Disney Channel show. It includes an electronic stethoscope, stickers, a name tag, and three other toy tools; any fan of the show will appreciate all of the cute detail added.

Sometimes our children drive us “un poco loco” so it’s only fitting that they have a guitar modeled after the Disney Pixar film Coco. The skull at head “chomps” when the first chord button is pressed and the guitar lights up. The movie authentic detailing will have your child believing it’s the actual guitar from the film. The instrument also comes with sheet music that teaches traditional Mexican songs including the Grammy Award-winning song from the film, “Remember Me”. One reviewer said, “Bought this guitar for my almost two-year-old because he recently fell in love with the movie coco. I know he’s a little young for this guitar but he loves it!!! He grabs it when we watch coco and lays in his lap, strings up and strums when Miguel plays his. Too cute. Packages arrived in a huge box lol and the guitar works great!!! It lights up and changes cords when you press the buttons.”

Splish-splash, it’s time to take a bath. Bring on the nostalgia as you watch your little one play with characters you remember from your childhood. Have a blast during tub time with the Disney Junior Muppet Babies Tub Time Cruiser! Captain Kermit, the water squirter, and his floating pirate ship want to join your little ones for some water fun. Kermit comes with his fun little pirate outfit and when you squeeze him, water squirts out. How fun! The pirate ship comes with a water strainer that kids can pour to make the ship sail around the tub. There are also three secret windows that really open! Captain the ship with Kermit at the wheel, he can ride on his pirate ship through the dangerous bubbled-waters. Warning: It may be difficult to get your kid out of the tub but they’ll be racing to get in the tub so you win some you lose some.

Be sure to check back for more Team Scary Mommy-approved toys to keep the little ones occupied!