The best Beyblade toys will have the whole family battling with a “3, 2, 1 – let it rip!” (yes, even you Mom!). Beyblade Burst toys are unlike any other kids toy around, so although their collection of knight toys and rocket launchers may have their toy box overflowing, we promise you’re not buying the same stuff over and over again.

Related: 100+ Hard Riddles That Will Make You Think Twice

At first glance, you might not get why these battle tops are so fun. (We admit, we didn’t fully get it at first, either.) They seem like just another toy that will ultimately sit in a pile of ignored junk after 5 minutes of playtime. But this is where parents are wrong! There is so much than meets the eye. First off, you can’t beat the thrill of the launch and yelling “3,2,1, let it rip!” adds to the fun. On top of that, each Bey has different strengths and individual origin stories. All of this incredible Beyblade mythology is fully explained in the captivating Beyblade animated series (which happens to be Japanese anime based on a manga series) and it’s soooo awesome! The characters are strong yet sensitive, the storylines are suspenseful, and there are tons of Beyblade battles that your kids will spend hours reenacting.

If your kids are already into Beyblades, then you know there is nothing quite as exciting as a burst finish from a Beyblade Burst Turbo toy. But for those of you who are not yet experts, here’s a quick intro into the world of Beyblades.

Beyblade Metal Fusion toys are facilitating battles on living room floors worldwide, thanks to Takara Tomy. Originally created by Japanese toy giant Takara in 1999, (they’ve since merged to create Takara Tomy), Beyblades have quickly spread across the globe. Beyblades are readily available stateside thanks to Hasbro, which is the licensed manufacturer of Beyblades in North America. But there is something still incredible about getting your hands on an original Takara Tomy Beyblade burst toy from Japan. And thanks to Amazon, it’s easier than ever to track these originals down.

All the best Beyblade toys are made of 3 parts: The attack ring or energy layer is the colorful top part of the Bey that is designed to strike the opposing battle top. The forge disc is a simple disc that secures onto the energy layer and gives the bey its weight. Lastly, the performance tip is where the Bey balances and moves on the floor or stadium. All these pieces securely attach to one another to create one of four types of Beys: attack, balance, stamina, or defense. All you need now is a ripper to pull with all your might and you’ve got a bonafide Beyblade battle!

Beyblades are a ton of fun! There is competition, imagination, and even some cool science all wrapped up into one toy. And although Beyblades can be played on any flat surface, the best Beyblade toy battles usually happen inside an arena. Regardless if you have an arsenal of Beyblade Metal Fusion toys at home (and have likely downloaded the new Beyblade App by now) or the world of Japanese battle tops is brand new to you, we want to welcome you to the exciting world of Beyblades.

Without further ado, we’ve rounded up the best Beyblade toys available so you and your kiddos can have some action-packed fun. Also, let us congratulate you on becoming the coolest parent around. 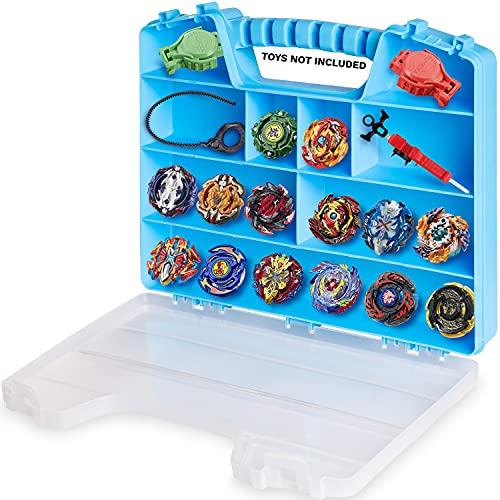 Keep all those Beyblades organized and portable with the Ash Brand battle Bey toy case. Featuring an easy-to-carry handle and super-tough hinges, this sturdy battle top case holds up to 30 Beyblades. “Finally, something to sort all of my son’s Beyblade bits and parts,” reviews one customer on Amazon. “It is sturdy, closes firmly with a solid click, and the plastic edges are smooth (without the sharp slices that can happen on cheaper plastic). I would buy it again, and probably will for his friends’ birthday gifts coming up.” Guaranteed to keep both mom and toy enthusiasts happy, what parent wouldn’t be happy to have a designated place to house all those Beyblade bits and pieces. Ash Brand is known for its state-of-the-art storage cases, check out the mini doll and action figure toy organizers, too.

Introducing the best portable battle top system for your Beyblade enthusiast. Home4 has created a compact 11 by 11 inch Beyblade arena case with just enough space to stash a few favorite Beys. Your blader will be ready to compete anytime anywhere thanks to this mobile storage stadium. “This is not made by Beyblades but works perfectly as a way to house them in a ready-to-carry case that also serves as a small stadium for playing with them. Small enough to fit in a backpack but no need with its handy carry handle. Three weeks in and it’s held up, already worth the money,” reviews one customer on Amazon. Made from lightweight non-toxic plastic, the portable case features sturdy latches and an easy carry handle for battles on the go.

When pinpoint accuracy is more important than speed, the Turbo Slingshock Precision Strike Launcher is your ripper. “Let it rip” takes on a whole new meaning with this ultra-accurate multi-burst ripper that will guarantee to take your competition to the next level. This windup ripper is trigger activated, which is tons easier for little hands to manipulate than the more difficult to pull standard ripper and the off-brand string launchers, too. “I got this as a gift for someone that has a hard time using the standard ripcords because of a physical disability and they can use it perfectly. Very cool!” reviews one Amazon customer. Don’t worry, this launcher is totally compatible with all right and left-spin Beyblade Burst battle tops, including Slingshot and Switchstrike Beys.

Check out the ultimate Beyblade Burst Evolution multi-pack for the Beyblading enthusiast. This high-performing warrior 4-pack includes right-spinning Draciel S, Dranzer S, and third-generation Xcalius X2. But the real draw to this set (besides the great price for 4 amazing beys) is the fan fave Genesis Valtryek V3 SwitchStrike top. “So much fun,” reviews one parent on Amazon. “My son absolutely loves these Beyblades! He has been collecting them for a while now and has been having so much fun with this set!” Once your Beyblader has battled their fave warriors, let them mix and match energy layers, forge discs, and implement performance tips to create a custom champion warrior. Beware that this set is intended for established bladers and does not include a ripper or stadium.

A great introductory set to gyro attack blades, the Elfnico 2-pack comes battle-ready with two Beys that work with the included rippers. Although Elfnico is a third-party manufacturer and not an official Beyblade product from Hasbro or Takara Tomy, these Beys are sturdy and resemble the ever-popular Spriggan and Spyzen Requiem battle tops. “Very high quality,” reviews one customer on Amazon. “Not flimsy at all. My son has over 30 Beyblades and these are the best!” Increase battle speed and strength by connecting the included grip handle onto one of the standard rippers for a more powerful launch. Plus, parents of younger Beybladers will find the grip makes it easier for little hands to manage.

Incredible for beginner or advanced Beybladers, the Hasbro battle tower set comes with everything a Beyblading fanatic needs for hours of batting fun. The Burst Evolution set includes 2 launchers and two Beyblade Burst Switchstrike right-spin battling tops, Strike Valtryek V3 and Noctemis N3. Plus it includes a new state-of-the-art multi-purpose battle stadium, with dual levels. “Awesome arena,” reviews one parent on Amazon. “The arena is surprisingly well designed for contact (same layer) or stamina (separate layers) battles. My 2-year-old took 5 days to learn how to use the launcher. But once he got it, it’s great battle time with his older sibling. Thumbs up from us.” Although recommended for kids over 8 years old, it’s clear that even the youngest family members will love the excitement of Beyblade battles. Especially when the Beystadium is a unique 2 story battle colosseum.

The Rail Rush Battle Set features a unique arena with grooved interior tracks for the ultimate Slingshock battles where Beys actually ride the rails and quickly change directions because of it. “Absolutely the best stadium they have made so far!” exclaims one Amazon customer. “Hours and hours of fun guaranteed with this new stadium. The two attack portals really amp up the excitement and thrill of the battle. If you don’t have this stadium it’s a must.” The battle set comes with one attack Bey (Wonder Valtryek V4) and one balance type (Z Achilles A4) with their necessary launchers for hours of battling fun.

In this awesome Slingshock collection, your blader gets 2 complete Beyblade Burst tops with 4 additional performance tips. Rip the left-spin attacker Luinor or the right-spin defensive Hercules as designed, or mix it up with different performance tips to create your own champion Bey. That’s right, just swap different tips of the Bey to create a defensive, balance, stamina, or attack type. “A great competitive set,” reviews one customer on Amazon. “My son and I love this set. The energy layers seem a bit heavier than the other Hasbro ones we have purchased. These are some of our toughest, hardest to beat Beys.” Heads up, this set does not come with a launcher.

These super-slick black and gold metal fusion Beys will be fast favorites of anyone serious blader. Made by Rokk Now, a third-party manufacturer of battle tops, this set comes with 4 bursting battle Beys, 2 ripcord launchers, and a mini battle arena. “I purchased this as a gift for my grandson and he absolutely loved them. They’re made with metal so they’re more durable than the plastic ones. He is a little rough on his toys so these made the perfect gift for him,” reviews one grandparent on Amazon. The heavy-duty metal fusion attack Beys do work with other rippers and can be mixed and matched to create the ultimate gyro attack blade.

Nothing beats the original power of the Takara Tomy Superking B-159 Booster Super Hyperion Beyblade. Even though they are the creating forefathers of Beyblades, Takara Tomy Beys have been very hard to find with Hasbro being the primary authentic Beyblade manufacturer in North America. But thanks to Amazon, serious bladers can finally get their hands on these Japanese attack tops. “The real deal,” reviews one happy customer on Amazon. “This bey is great, it’s the real Takaratomy. It’s a right-spinning attack type and hits super hard. The new chassis system is great too. It’s a must-have Bey for anyone into Beyblades.”