In the age of Netflix binging, and rebinging, there’s one show we love to watch again and again: The Office. The sitcom about the fictional paper company Dunder Mifflin has created an enormous following with fan fiction and die-hard fanatics. So when a birthday or holiday rolls around, you know what to get them: The Office TV show gifts.

RELATED: THE BEST, Non-Basic Gift Ideas For Your Boyfriend

Gifts for The Office fans can range from a jigsaw puzzle of the whole gang to a collectible Dwight Schrute bobblehead. Basically, anything that reminds them of Michael Scott’s well-intentioned but cringe-worthy antics, Jim and Pam’s slow burn love story, and Dwight’s general bizarreness. The Office TV show merchandise is all over the internet, so we’ve narrowed down the best options that any fanatic of the show will be guaranteed to love.

Here are the best The Office gifts for all the biggest fans in your life (even if that fan is you!).

This may not be an original, but it’s definitely a collector’s item for die-hard The Office fans. Pam’s painting of the Dunder Mifflin Building will look great in your giftee’s home office.

Join the very exclusive Finer Things Club with this canvas tote from Redbubble. Oscar, Pam, and Toby would totally rock this around the office if they could.

This official NBCUniversal “World’s Best Boss” Mug is the perfect gift for any fan of The Office or boss (whether or not they buy it for themself). It has the Dunder Mifflin logo on one side, can hold 11 ounces of coffee or any beverage of choice, has an easy to grip handle, and is both dishwasher and microwave-safe — it’ll quickly become a go-to mug during the workday or weekend. (There’s also a 15 ounce version for anyone who likes to have an extra large dose of caffeine). Proudly displaying this mug on your desk shows confidence and says to the world, in the words of Michael Scott, “People say I am the best boss. They go, ‘God we’ve never worked in a place like this before. You’re hilarious, and you get the best out of us.’ I think that pretty much sums it up.” Also appropriate if you are the boss of your house.

An official Dwight Schrute Bobblehead makes a great addition to any Office lover’s desk. The seven-inch tall figurine is an officially licensed product from NBC and will be the best coworker someone can ever have, constantly nodding in agreement to whatever they say, like a true hype man. In a Season 2 episode called “Valentine’s Day,” Angela gave Dwight a bobblehead of himself, which he of course loved. After the episode aired, fans enjoyed the prop so much that they started an online petition to get the NBC store to sell Dwight bobbleheads. NBC obliged; the first-run sold out immediately and NBC went on to sell over 150,000 bobbleheads, making them the most popular item for the store at the time. This version of Dwight will definitely make a pal smile while they’re at work, which is a gift that keeps on giving. (FYI, there’s also a Michael Scott version available.)

MagicMatch Designs "I Feel God in This Chili’s" Tea Towel

Pam Beesley fans unite! This tea towel will look great in any kitchen. The not-so-obvious allude to Pam’s speech will show you who really loves the show if they catch the reference.

Any fan of The Office will love putting their time into this 500 piece puzzle from Urban Outfitters. It has most of the gang in Scranton, PA.

The Office: The Official Party Planning Guide to Planning Parties By Marc Sumerak

Plan a party The Office style! This party-planning guide includes all the themed parties of the show (and how to pull them off), recipes, party games, and more.

Know a The Office fan who’s also a master in the kitchen? No doubt they already have a cutting board, but they don’t have this one. Who wouldn’t want to be reminded of Kevin’s chili every time they’re cutting veggies?

Support Jan’s side hustle and way of relaxing by gifting this Serenity by Jan candle! This is a 16oz, soy-wax candle, with the scent “Bonfire.” One happy Etsy customer said, “This candle is amazing. It was such a hilarious present to give, especially when you opened it and it truly smells like a bonfire. Thank your for the product and the laughs!!!” 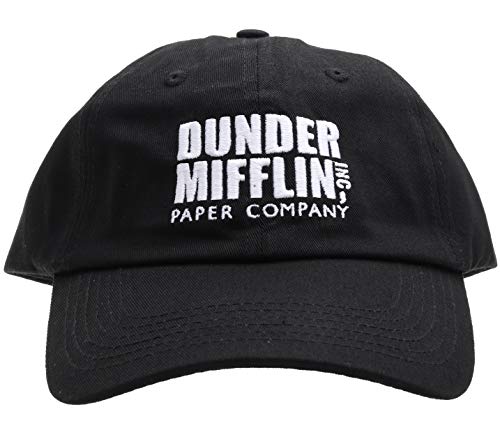 Amazon customers are raving about the quality of this The Office-themed hat. It’s 100% cotton with an adjustable strap for comfort. Any  show fanatic would be proud to rep the best paper company in Scranton!

Your giftee can take their favorite The Office quote wherever they go with this keychain! The famous line is sure to bring a smile to their face whenever they reach for their keys. One Etsy reviewer said, “Sturdy quality and beautifully crafted!! I’m definitely adding this to my keys.”

When you need to celebrate someone’s accomplishments, big or small, why not give them a trophy in the form of a Dundie Award? Take a cue from Michael Scott’s annual employee awards show, held at Chili’s, which rewarded everyone for something by giving out awards for the Whitest Sneakers, Don’t Go In There After Me, and Jim Halpert. This seven-inch tall trophy shows a professionally dressed business man holding a briefcase and will make a great conversation piece. It’s the perfect gift for anyone, except the guy from HR. One happy reviewer said, “Got this for my son who is a huge Office fan. He loves it! When I opened it, it was larger than I had expected, which is great! I was expecting a small figurine that would stand on a nightstand, but you can hold it in your hand like an actual award. If you know someone that a die-hard Office fan, this is a great gift!” 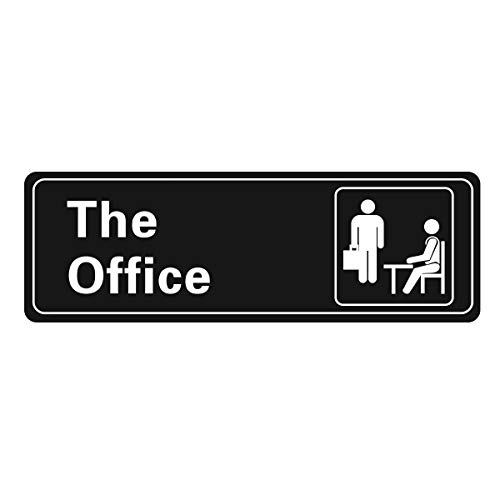 Fans will remember this logo from the opening credits. It works as great door decor for any true fan of The Office. One Amazon reviewer said, “Looks just like the sign from the show! Covered in protective film, which was easy to peel off, and the entire back is covered in 3m adhesive. A perfect gift for an office fanatic!”

Customize the star mug that  Kelly gave out as party favors to everyone in the office (the same party that Jim and Dwight weren’t invited to). Your favorite The Office fanatic will love having their face (or yours) on the mug just like in the show. 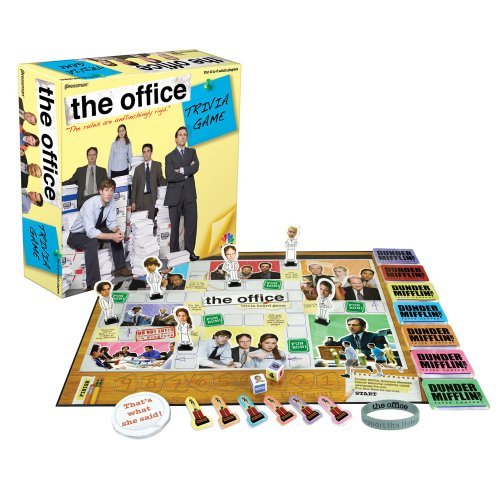 Does your think they know everything about The Office? Test their knowledge with this trivia game! It’ll make for a fun game night and tons of laughs.

That’s What She Said Whiskey Glass

There are few jokes that can turn an otherwise seemingly innocent sentence into something a teenage boy would giggle at, and Michael Scott loves an opportunity to make a “That’s what she said” joke in any situation to anyone in the room, and sometimes even in response to his own words. Now you can do the same from your home, in a slightly more subtle way. This 11 ounce whiskey glass cleverly expresses Michael’s favorite one-line joke by quoting She with “That’s what.” After a long day of work, running errands, or dealing with exhausting kids, you’ll be more than happy to put this highball glass in use for an adult beverage or two. Get or gift a set of two so you have a drinking buddy while you watch reruns of The Office; just looking at them will leave you with a smile on your face (that’s what she… you get it). Sorry, whiskey not included.

The Office fans will love these Schrute Farms beet socks!

The Office: The Complete Series

Relive all the best moments, mishaps, and coworker pranks from The Office with the complete DVD set, which include all nine seasons of the show (that’s 201 episodes on 38 discs for anyone counting) and will practically transport you to Scranton, PA. Besides the episodes, the set is also loaded with tons of extra goodies. The boxset is a top seller in Comedy on Amazon with over 2,000 reviews, and with it, you have the flexibility to pick and choose to watch your favorite episodes or start a TV marathon and make your way through the series from the premiere to finale. For diehard fans, there is a variety of bonus features that will take you deeper into the world of Dunder Mifflin, such as bonus commentaries, blooper reels, deleted scenes, webisodes, original cast audition tapes, fake PSAs, the final table read, cast farewells, and more. There’s enough content here to keep you laughing for days.

It’s Michael Scott, pocket-sized! This Funko Pop! figurine is a 3 ¾ inch tall Michael wearing a blue suit and carrying his signature World’s Best Boss mug. Plus, when you open the box, the quote “That’s what she said” is printed on the flap as a little inside (the box) joke. It makes for great desk decor either by itself or along with others in the collection — there are also Funko Pop! versions of Dwight, Pam, Jim, Kevin (holding a big pot of chili), Darryl, and yes, even Toby. One reviewer who gave it as a gift said, “Got this as a stocking stuffer for my husband. He loves The Office and I thought it would look cute on his desk. It is VERY detailed and overall, a really nice collectible. He really likes it and eventually I will add more to complete the collection I highly recommend it.”

The Office Stickers Pack of 50 Stickers

Add a little Office humor to your accessories. This pack has 50 different themed vinyl stickers, each about 2.5-4 inches big, that you can use to decorate your laptop, water bottle, phone, desk, whiteboard, or any surface that could do with extra flair. You can find iconic quotes (“I’m not superstitious. But I am a little stitious,” and “The worst thing about prison was the dementors,” for example) as well as the hilarious faces of Dwight, Jim, Pam, Kevin, Stanley, and more. One happy reviewer said, “This is a great purchase for The Office fan in your life! No two stickers are the same, so all of them have unique quotes, memes, and images from The Office that will make you laugh. The stickers are high quality are good-sized, perfect for a laptop case or water bottle. I am very happy with my purchase and so was the person I gifted it to!”

For anyone who loves The Office and also appreciates a good side hustle, say Guten Tag to this soft, cotton sweatshirt. It features a funny nod to Schrute Farms Bed and Breakfast, a reference only true fans will appreciate. (Reminder: In his spare time, Dwight is the proprietor of Schrute Farms, his beet farm where they make their own mattresses and which he claims is a lot more than just a bed and breakfast. It’s an agritourism destination, which consists of “tourists coming to a farm, showing them around, giving them a bed, giving them breakfast.” Tours of the field and of the barn are also available.). One obvious Office fan and reviewer said, “Don’t worry about being accused of identity theft… buy this cozy sweater to warm you up before and after scuba! Arrived timely and fits perfect! A subtle but hilarious nod to the best tv show ever.”

For more great shopping ideas, check out all of our other Gift Guides.

Alpha Awards Dundie Award Trophy for The...
$16
AT AMAZON

That’s What She Said Whiskey Glass
$19
AT WALMART

The Office: The Complete Series
$60
AT AMAZON

The Office Stickers Pack of 50 Stickers
$7
AT AMAZON

The Office: The Official Party Planning ...
$30
AT URBAN OUTFITTERS