Learning how to deal with scary stuff is part of growing as kids. It may start with them sleeping in their own bed without a nightlight. Eventually, they may even be brave enough to clean out under the bed. (There always is some scary sh*t under there.) Helping kids face their fears is part of parenting.

But when it comes to allowing them to read scary books for kids, you may pause. Are they ready? After all, you don’t want them to read some horrifying book and scar them to the point they end up sleeping in your bed until they’re 16.

Some mild scares are good for kids, helping them progress through their mental development and maturation. As an elementary teacher, Katie Carella, M.Ed., gave students the choices of books across all genres, including scary books.

“I’ve specifically been determined to bring horror-lite content to young readers, because I feel strongly that adults should allow — and encourage — children to experience feeling scared through books,” says Carella, who’s now an Executive Editor at Scholastic Inc. “Feeling scared in this way, while in a safe environment, can help children gain the tools they need to better cope.”

She says kids may find some of the things they worry about, both real and make believe, spelled out in scary books for kids. Reading about those things can make them less scary.

Now, we’re not talking about letting your 8-year-old borrow your Stephen King collection (baby steps, people, baby steps), but you can fill your kid’s bookshelf with age appropriate scary children’s stories. Maybe start with some frighteningly fun stories around Halloween, and then migrate to scarier books at any time of the year. They may develop a greater love for reading after an introduction through the horror genre.

Every kid is a little different, so we’ve picked scary books for kids in our list that run the gamut from funny to creepy to frightful. (After all, you don’t want to scare the kid to the point where he wets his pants … especially if he’s sleeping in your bed after your first failed attempt at introducing him to scary children’s stories.)

Night of the Living Dummy, Goosebumps #1 by R.L. Stine

No list of scary children’s stories would be complete without the most popular series of scary books for kids of all time, Goosebumps. This title is the original book in the series. As the name suggests, it deals with ventriloquists and their dummies. And what could be scarier than a creepy ventriloquist? Way more terrifying than the dummy.

One of the most popular recent series is The Last Kids on Earth, and this is the latest book in the series. It uses mainly black and white illustrations to enhance the starkness, while also delivering plenty of laughs. Your kid even might feel like he could step right into the book and battle the monsters successfully. (And if you want to throw in a subtle reminder that all of the best monster hunters put their toys away every night, no one would blame you.)

City of Ghosts by Victoria Schwab

If your children see ghosts around every corner once it’s bed time, this might not be the book for them, as the main character actually DOES see ghosts. But for kids who like a high level of spookiness in their horror books for kids, this title is well done.

Hershel and the Hanukkah Goblins by Eric Kimmel

Hanukkah and horror don’t typically go together (although our adult friends who have attended Hebrew School may say otherwise). But this classic best scary book for kids combines the two, as the hero has to stand up to goblins to save Hanukkah. It’s not a super frightening story, so it may be a nice introduction to scary children’s stories for the kid who’s not quite sure whether she will like them.

The Stonekeeper: Amulet by Kazu Kibuishi

For kids who prefer graphic novels and comic books to traditional book printings, this book has great drawings to bring the horror to life. (And if you don’t consider a graphic novel to be a real book, you’ve been duly warned.) In this title, the main character must deal with the loss of a parent, so it may especially appeal to kids who have had a similar tragedy.

If you have a fear of what you’ll find in a load of laundry, this book is for you. But the story is about far more than smelly, haunted laundry. The heroine tries to deal with running her family laundromat while a ghost tries to sabotage her efforts. Kind of like that stray sock that always appears without its mate after a load of laundry. Now that’s creepy.

This title, from the author of the Winternight trilogy for adults, does a good job of causing you to sympathize with the main character, so it may be geared toward slightly older pre-teens or young teenagers who can put themselves in the heroine’s shoes. Beyond being a best scary book for kids, it also was voted as one of the best kids books of all genres for 2018, so it appeals on various levels. The frights seem very real, as quite a bit of the story takes place on a school field trip, which — as those of us who have chaperoned a few of those trips know — should be an adult horror story staple.

Where the Woods End by Charlotte Salter

This horror book for kids has a Little Red Riding Hood vibe, which is a good base for scary stories. (I mean, have you actually thought about the subject matter in the fairy tales we tell to our toddlers? F***ing dark as hell.) With this title, you’ll receive a scary theme along with a bit of mystery on the heroine’s true calling, which makes it a nice choice for kids who may be interested in both genres.

Nightmares are terrifying for kids and adults alike. (Although our nightmares include paying for college, that crazy thumping noise the car is making, and how these crow’s feet arrived by age 30.) In this title, the hero’s nightmares bleed over into real life. So, actually, it IS a lot like adulthood.

Ghost and Bone by Andrew Prentice

Kids often feel like they’re cursed, such as when they can’t talk their way into extra screen time or when they are forced to clean their rooms. Only a curse could explain why their parents are so damn mean. It has to be some sort of supernatural intervention. But with this title, kids will learn what a true curse is, as the main character is cursed with being half ghost, half boy. (Which, surprisingly, is not as cool of a way to live as it sounds at first.)

Beneath the Bed and Other Scary Stories by Max Brallier

For younger kids, mild scares are the way to go. This title (which is the first in a series) has great artwork and easy to read text that will make younger children feel brave as they read it. Now if only there was an adult version to make you brave when asking your boss for a couple of extra days off around the holidays, it would be an automatic best-seller.

This title delivers another mildly scary book series aimed at really young readers. We love the topic, as elementary school can be among the scariest places imaginable for young children. (There’s no reason to tell them yet that the truly scariest place on the planet is f***ing high school; let them discover that unholy level of hell on their own in a few years.)

No list of the best horror books for kids would be complete without Bunnicula, which now has a 40th anniversary edition. You may have read this one when you were a kid. And now you can create a heart-warming moment with your child when you share this story of a vampire rabbit that drains carrots of their juice. (Fair warning: There’s a 50/50 chance your kid will be relaying this moment to a therapist in the future.) It’s more silly than gory, so it’s a nice introductory book to scary children’s stories. But you may never look at your family pets the same way again.

Coraline is a classic scary book for kids, and it’s been given new life in a graphic novel format. The creepy factor was pretty high with the original book, and the haunted illustrations in the graphic novel heighten the unsettling feelings perfectly. By the way, this one is not for those with a fear of hairy, disgusting, spiders (all of which should burn in hell). If you have arachnophobia, the drawings are so good, you may end up hitting this book with a shoe.

The Graveyard Book by Neil Gaiman

Neil Gaiman knows how to write horror books for kids, and this title is another classic that’s been released as a 10th anniversary edition. The story has a human child living with a family of ghosts in a graveyard. (Again, not as cool as it sounds at first blush.) Gaiman brings the characters to life so successfully that you may start believing in ghosts after reading this one.

Out to Get You by Josh Allen

Despite the title of this book, it’s not about your least favorite co-worker’s constant attempts to sabotage your career. Instead, it’s a creepy collection of 13 short stories where everyday items and circumstances take on a sinister slant. (Well, maybe it IS a little like your relationship with your co-worker after all.) With the short story format, it’s great for kids who don’t have the desire to dive into a longer book.

The Halloween Tree by Ray Bradbury

Ray Bradbury is best known for his sci-fi books, but he also created a scary book for kids several decades ago that still gives kids chills today. Kids will love the Halloween theme and the idea of a Halloween tree. And if you want to mess with your kids after reading this book, hang a few fun size candy bars on a tree in your backyard and see how long it is before they figure out that Halloween trees don’t actually exist. 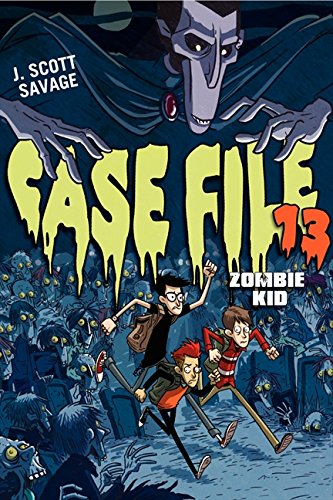 Case File 13 is a book series with the theme of monsters, ghouls, and zombies, but is pretty funny and entertaining for both you and your little one. The story of Case File 13: Zombie Kid follows three best friends on a mission to solve the strange mysteries that occur in their hometown. 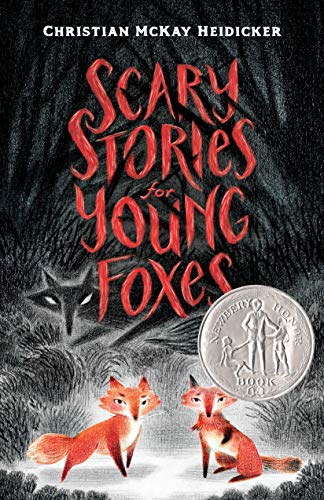 Who says you can’t have a story about friendship and a story with monsters all in one book? Scary Stories for Young Foxes by Christian McKay Heidicker is just that. When two foxes are separated from their family, they go through monstrous journey to find a place to call home.

If you’re looking for books that don’t have as much of a dark side, we did put together a guide to the best books for kindergarteners.

The Last Kids on Earth and the Midnight ...
$6
AT AMAZON

City of Ghosts by Victoria Schwab
$6.78
AT AMAZON

Hershel and the Hanukkah Goblins by Eric...
$8
AT AMAZON

The Stonekeeper: Amulet by Kazu Kibuishi
$11
AT AMAZON

Sheets by Brenna Thummler
$17.23
AT AMAZON

Where the Woods End by Charlotte Salter
$5.58
AT AMAZON

Ghost and Bone by Andrew Prentice
$17
AT AMAZON

Coraline by Neil Gaiman
$10.58
AT AMAZON

The Graveyard Book by Neil Gaiman
$8.99
AT AMAZON

The Halloween Tree by Ray Bradbury
$16
AT AMAZON

Beneath the Bed and Other Scary Stories ...
$5
AT AMAZON

Eerie Elementary: Classes Are Canceled b...
$5
AT AMAZON

Scary Stories for Young Foxes by Christi...
$9.99
AT AMAZON