8 Best Co-Sleepers For Baby, According to Moms 2021

A co-sleeper is probably on your to-buy or baby shower registry list. When you’re pregnant, you know to invest in a several big-ticket baby gear items, like a crib, crib mattress, dresser, changing table and glider, but one that you might be forgetting that is, how do we put this, incredibly crucial to your survival during those first three months of your baby’s life is a co-sleeper (also known as a bedside sleeper).

We know what you might be thinking: “I’ll have my baby sleeping in the crib within a few weeks.” Ha! You just wait. Not only is it more manageable to have your baby sleeping in the same room as you during those first few months, especially if you’re breastfeeding, but the American Academy of Pediatrics recommends room it— for the first 6 months, in fact, or, ideally the first year. Because co-sleeping, or sleeping in the same bed as your infant, comes with its own share of safety concerns, it’s best to saddle up your little one in a baby co-sleeper, which is similar to a bassinet, except for the fact that it actually attaches to your bed in some way, shape or form.

A baby co-sleeper bed can either be lowered, raised or swiveled into position so that your baby is snoozing as close as possible to you without actually sleeping with you. Trust us when we say that not having to get out of bed and zombie walk down the hall into your baby’s room six times a night will be welcomed. Doing the middle-of-the-night feeds without even having to leave your bed will help you both fall back to sleep more easily.

Enter: the best co-sleepers, according to moms who’ve made it past the newborn phase and lived to tell the tale. 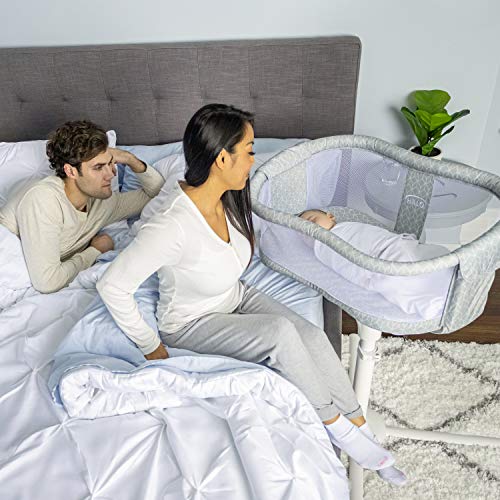 This is one of the most popular co-sleepers out there, mainly because it’s a fully functioning bassinet that actually swivels as close as physically possible to your bed without actually having your child in bed with you, thanks to its 360º swivel technology. It also features a patented lowering bedside wall that can be locked in an upright position to make for easier middle-of-the-night feeds. It also comes with pretty much everything you need—a waterproof mattress and one machine-washable fitted sheet (although you might want to purchase a few more because, #newborns). 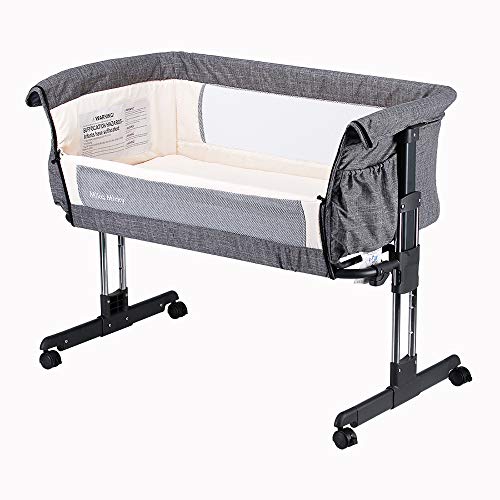 This bedside sleeper is quite similar in its design to the Halo bassinet, except for the fact that it doesn’t swivel into position—instead, it has a drop-down side wall that lowers to allow you to easily reach your newborn. And if you prefer to use the bedside sleeper as a standalone bassinet, you can simply put the wall back up. Other cool features include two side pockets to store essentials, like pacifiers and burp cloths, and built-in wheels with breaks to allow for easy maneuverability. 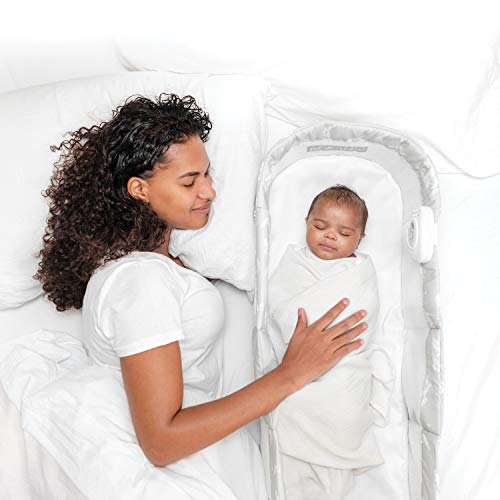 For the price, you can’t beat the deal this co-sleeper provides. Unlike other co-sleepers, this one is meant to sit in the bed with you as opposed to alongside the bed. However, like most other co-sleepers, it features rigid, vented walls that separate your baby from you during the night, giving Baby his or her own sleeping environment entirely. Your purchase comes with a nightlight, sound unit, waterproof foam mattress as well as a fitted, wraparound sheet, which is a total steal considering the price. 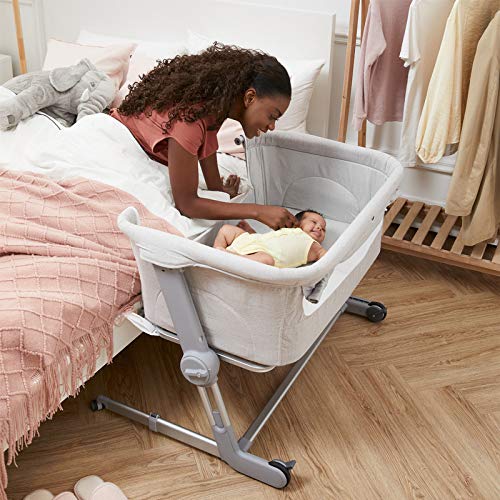 This co-sleeper is appreciated for its versatility. If you can’t make up your mind over whether you want a bassinet, co-sleeper, standalone crib or a travel crib, you can just purchase this product and be done with the decision making! It transitions from one mode to the next easily and features breathable mesh panels in each and every one. It’s super durable thanks to a stabilizing bar, telescoping feet and patented safety locks that keep the wheels in place when it’s not meant to be in movement. 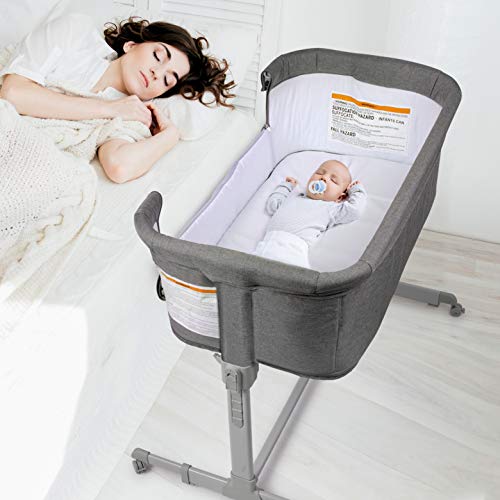 This co-sleeper has a wall that breaks down with a simple zipper contraption so you can easily attach it to your bed or raise it up and use it as a standalone bassinet. It has five adjustable heights so you can make sure it aligns properly with your bed. It also has built-in wheels and brakes, which makes it much easier to move around the room if needed. This maneuverability, as well as the fact that it’s lightweight and easy to carry, also helps if you plan to use it as a travel bed. 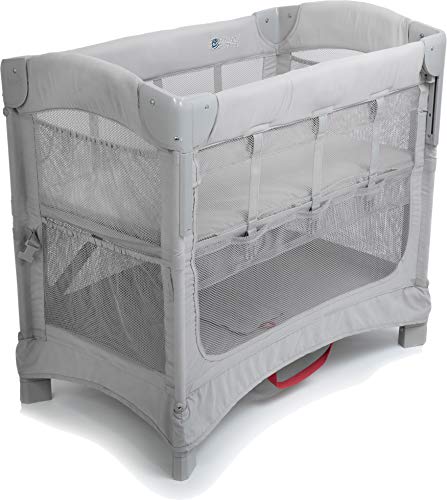 This 2-in-1 sleeper has two modes—it can be used as a co-sleeper as well as a standalone bassinet. It also comes with everything you need—a mattress, fitted sheet, carry case and a fastening strap to attach it properly to your bed. One thing parents appreciate is the easy set up and portability of this bedside sleeper. One reviewer adds, “I also love that the sides are mesh. It gives me peace of mind with my moving little one at night!” 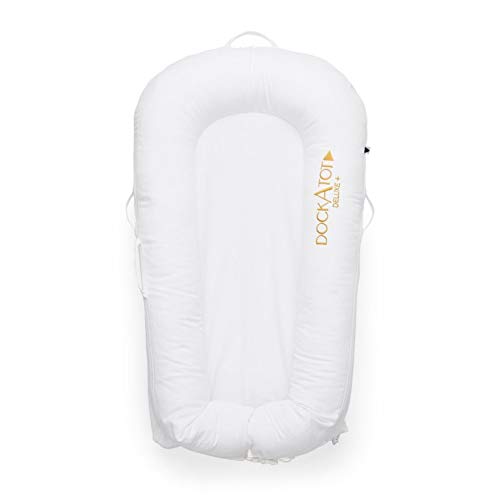 This certainly doesn’t look like your standard co-sleeper, but don’t knock the Dock-A-Tot just yet. It’s one of the top-rated sleeping solutions for young babies who desperately need to be close to their mom at night. Designed for infants up to age 8 months, the Dock-A-Tot is a soft, plush lounging device that conveniently cradles your baby to make for a more appealing sleeping environment than a flat surface, like a regular bassinet. It can be great for co-sleeping, as it gives your baby its own place to sleep securely. It is, however, worth noting that the AAP does not recommend the use of co-sleeping devices such as the Dock-A-Tot, however countless parents swear by it. Many parents will use when Baby is taking a supervised nap versus sleeping for the night, but it’s up to your discretion. 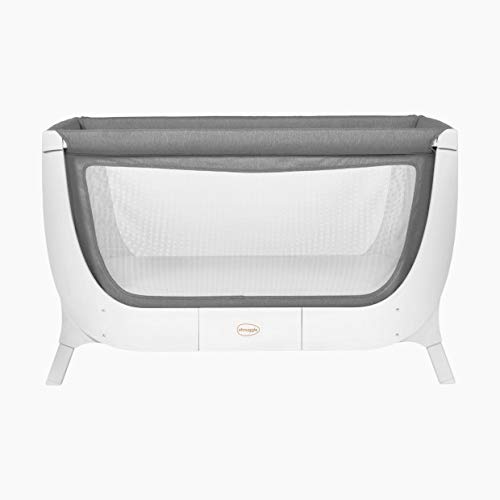 If you have a fairly large budget and are comfortable shelling out a bit more for a co-sleeper that’s sure to last you all of the little ones you have, this is a great choice. It has a unique, expandable feature that allows you to use it well past the 6-month mark—all the way to year two! One of the walls breaks down so that you can attach it closely to your bed or put it back up to make for a fully functionable standalone bassinet. It features dual-view mesh sides that promote breathability and allow you to see your precious angel while she sleeps.

Now that you’ve got your co-sleeper squared away, check out more baby gear you might need during year one and beyond.